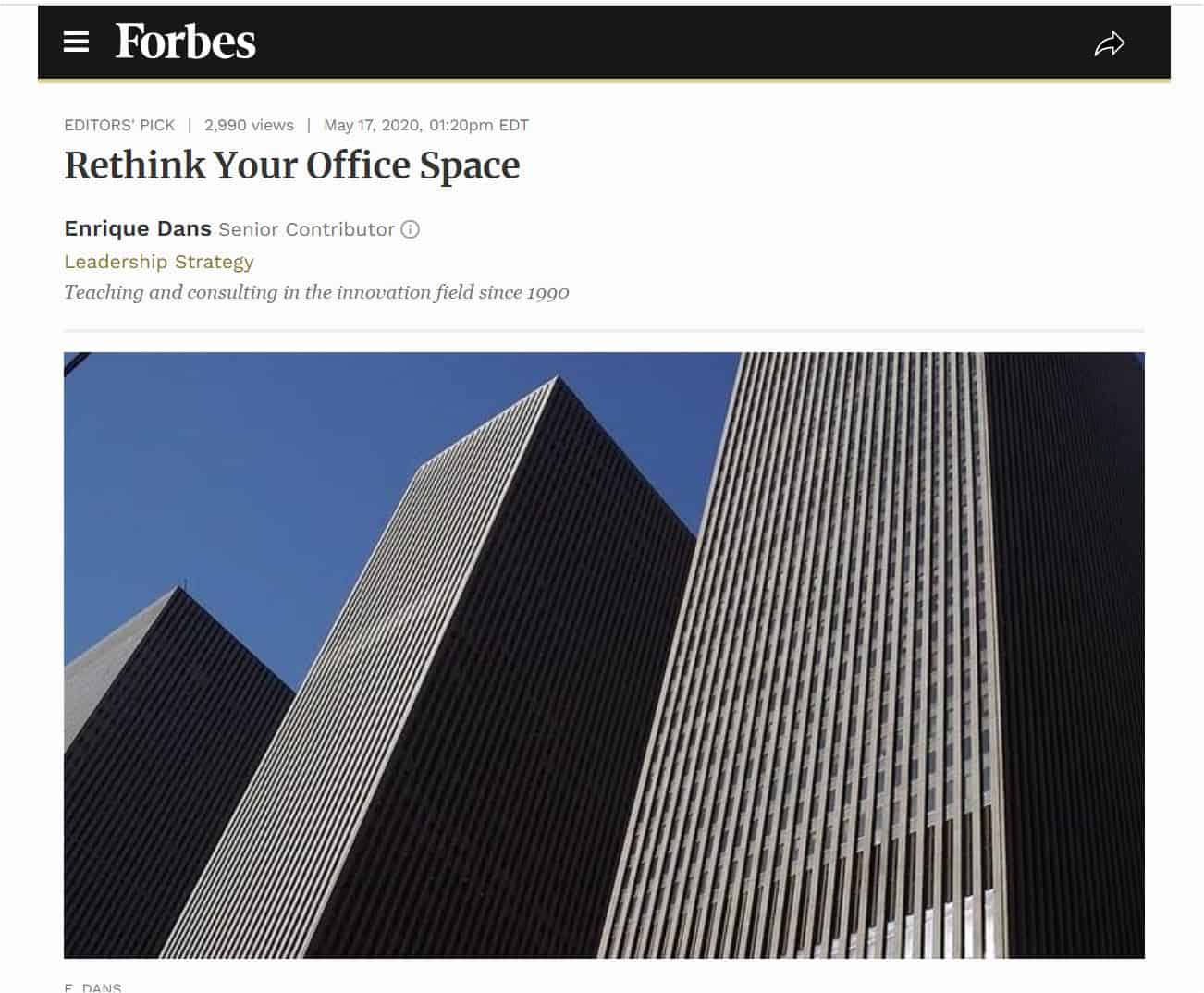 17 May FORBES | Rethink your office design

For decades, remote working and greater flexibility has been topical for organisation – it took two months for coronavirus to make it a reality.

The mass exodus from the office and proof that most employees can, in fact, perform their work anywhere  has had a major impact on the real estate market, particularly office space. Organisations are having to rethink the purpose of their office, and how their space is going to continue to work for them.

We predict that forward-thinking organisations will reinvent their workplaces for the purpose of more collaboration and socialisation.

This article, originally published by Forbes, looks at the trends created by COVID19 and what organisations need to start to consider to rethink their office design.

One of the major consequences of the pandemic — the largest experiment in working from home — is having a major repercussion on the real estate market, particularly office space, with predictions of a collapse in cities like New York.

Since the beginning of the pandemic, Google has pulled out of some 2 million square feet worth of real estate deals. Other companies, after the experience of working from home, have already divested 50% of their office space, while others are asking workers not to come to their facilities until next year, or never if they don’t feel like doing so. Everything indicates that in the near future there will be a growing surplus of office space, even if many companies are still committed to long-term contracts.

From the workers’ side, recent surveys show that two thirds of Americans may be able to work from home, that 75% of baby boomers want to work from home permanently, and that in general, half of all Americans want to continue working from home following the coronavirus. Many of those who have experienced working from home over the last two months have become comfortable with the idea of greater autonomy, better control of their working hours, organizing their space at home to work more comfortably or replacing endless meetings with talking to their colleagues through a screen. Obviously, some people are better at adapting than others, and some people say they miss the social side to office life, but the signs are that we’re due a rethink of the office as we know it.

More people working from home on a regular basis means fewer traffic jams and air pollution in our cities, hopefully making life easier. Seattle has decided to make its ban on traffic on more than 30 kilometres of streets permanent, so as to discourage residents from automatically getting back into their cars once the city reopens.

But if telework is to work, then employers and employees alike have to understand that it means much more than just sending people home and hooking them up to the internet. That approach, which has been blamed for disengagement and led some companies to cancel their work from home programs, is increasingly being replaced by flexible approaches that allow people to carry out their tasks from home on a regular basis, with the proviso that they return to the office for certain activities. Disengagement is no longer a problem: with the coordination tools now available, many workers have seen more of their bosses during the weeks of lockdown than they had throughout the previous year.

The future of work will be one where we no longer have desks or offices permanently assigned to us, and instead the idea will be to create pleasant spaces in offices for socializing and exchanging ideas or informal meetings. This is helped not only by the trend of technology becoming increasingly lightweight and portable — fewer companies are opting for desktop computers for their employees — but also by work methods such as design thinking, which can be carried out in spaces other than the traditional meeting room. Parking space? You can forget about having all your employees on your premises at the same time, so you should probably plan on saving some money on that…

One way or another, all these trends point to a rethinking of offices as we know them: a drastic reduction in total surface area, unassigned open spaces and functional areas where people work for much shorter periods of time than the traditional eight-hour day. In practice, a revolution of management methodologies based on trust rather than on the old notions of control and authority.

We’ve been talking about working from home for two decades: it took two months for coronavirus to make it a reality. Those who simply want to go back to the same offices and ways of working as before all this started only a few months ago, do so at their own risk.